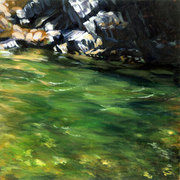 Olwen O'Herlihy Dowling was born in Dublin Ireland and emigrated with her family to the United States. She grew up in Malibu California. Her primary inspirations in art are Mary Cassatt and Winslow Homer. Olwen paints images in oil and watercolor of the West of Ireland, as well as North Chester where she lives in the Berkshire mountains. She is also a printmaker in Intaglio and is a Member of the Zea Mays Printmaking Studio, as well as a member of the National Association of Women Artists.

Olwen's paintings are in private collections in the United States and Europe. In recent years, she has exhibited at a number galleries in Dublin, Ireland, Northampton MA, and the Berkshires, winning several awards. Olwen's intaglio artwork is represented by the Zea Mays Flat File Project.

Olwen has also worked for over two decades in the professional theatre. She has designed scenery and backcloths for theatrical productions. Formerly, Olwen has been producer, managing director, production manager and stage manager for professional theatrical institutions, as well as director of The Northampton Center for the Arts. She graduated as a Studio Art Major from Smith College, and has also studied at the L'École d'Art, Vallauris, France and the Sun Valley Arts Program in Hailey, Idaho. Olwen is currently represented by her own gallery in North Chester Massachusetts and works as an arts consultant.

"I've been captivated by the printing process since my childhood, when I watched and helped my father develop black and white photographs. Still drawn to the intense contrasts and pattern typical of woodcut and wood engraving, I enjoy employing these media, and also exploring how medium affects an image--by using woodcut, paint, graphite to depict a single subject.

"I'm trained as a naturalist and also hold an M.F.A. degree in printmaking from the University of Massachusetts. My printmaking heroes are Käthe Kollwitz and Lyonel Feininger. I've exhibited my drawings and wood engravings throughout New England and have taught drawing, illustration, and relief printmaking at the University of Massachusetts and Holyoke Community College. I began my illustration career doing primarily scientific illustration, and have branched out to editorial illustration of newspapers and books, mural work and commissioned artwork. I'm a co-owner of Collective Copies, Amherst and Florence."

"I find inspiration in art made for ritual purposes, in my environment, and experiences. When asked how long it took me to make a piece, I think (though I don't always say) that I have worked on that piece all my life.

"To create what I need to create I have explored and learned from different media over the years, including plaster, clay, cold-cast metals, and fabric. I've carved and cast, added and subtracted. Each material and process has informed (and often overlapped with) what came next. Drawing is a constant in my work, and an equal partner to my work in other media. Through drawing I may complete an idea or prepare for a sculpture as I make decisions most freely, uncovering both limits and possibilities, and making thoughts visual.

"My formal art education occurred at Bard College, and at the School of Visual Arts in New York, where I received a B.F.A. many years ago. There I made very big expressionistic figurative oil paintings. I turned to sculpture after art school, when I could no longer afford oil paint and canvas. At that early time, lots of chicken wire and burlap were involved. Since then it's been one thing after another. What good fortune."