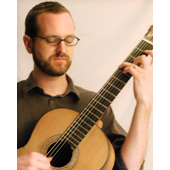 Jeremy Milligan received his Masters Degree in Classical Performance from the prestigious Hartt School of Music in West Hartford, CT.

He has performed in a wide range of music from Motown and Country to Broadway, Jazz, and Classical music.
He has been a freelance guitarist and drummer in the Pioneer Valley since 2002, as well as organizing numerous instrumental groups ranging from Jazz and Funk to Classical and contemporary acoustic music.

In 2008 ‘The Jeremy Milligan Quintet’ released Still Moving, an independent release of original instrumental music written and arranged by Jeremy.  Integrating Classical, Jazz, Latin, and Folk music, the Valley Advocate described it as “…a sound not like anything you’ve heard before.”

Jeremy is currently teaching at the Northampton Community Music School.