Losing My Religion: Confessions of a New Age Refugee 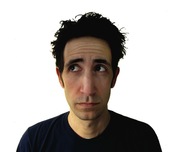 A one-man show written and performed by Seth Lepore, is a hysterical romp through America’s spiritual enterprise. The show exposes the blurry line between self-help and faith. Yoga gurus, healthy chocolate peddlers and Buddhists with God complexes ego-trip their way toward absurdity.

“Lepore comes across a lone, common-man hero…Possessing a rubber-faced ability to slide cleanly into character and deadly accurate powers of observation, Lepore’s acting is integral to the success of [the piece] and worth the price of admission alone.

Carefully chosen words make the satire wicked and the comedy rapier-sharp. His humor comes on many levels -- sometimes over-the-top, often much more subtle -- and that makes an evening rise above stand-up comedy to something closer to social commentary.” Brattleboro Reformer

"Part of your brain is reminding you that this is a… show mocking exploitative "self-help" programs, but another part will be telling you to sign up for what the gurus are offering. That's the strange danger of these characters, and Lepore conveys it with a precise, polished, unfailingly entertaining performance." Jay Gabler, Twin Cities Daily Planet

"[Lepore]… shows the perils of trying to embark on a spiritual journey when you have the intensity of a true believer but the direction of a lost soul… [and] shows off his integrity as a writer, directing the audience’s laughter at a commentary on the faux-spirituality industry, rather than the motivations of people who buy into it." DCtheatrescene.com

RSVP for Losing My Religion: Confessions of a New Age Refugee to add comments!

Sharon Raymond is now a member of Valley Art Share
Saturday
Welcome Them!