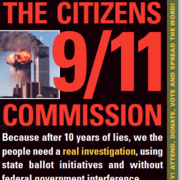 Citizens 9/11 Commission
This is a new initiative that uses the prevailing ballot
box, to establish a truly independent commission to
pursue justice regarding the events of September 11.
An Actionable Plan for 9/11 Truth and Justice

Join with Flyby News and Valley 9/11 Truth
Download article and support the campaign!

Mike Gravel was a two-term Senator from Alaska (1969–1981), during which time he was best known for his lengthy filibuster that ended the draft, and for reading the Pentagon Papers into the Congressional Record, the legality of which was confirmed in an historic Supreme Court case. Gravel later founded and served as president of the Democracy Foundation, Philadelphia II, and Direct Democracy, nonprofit corporations dedicated to the establishment of direct democracy in the United States through the enactment of the National Initiative for Democracy. Gravel founded the citizens’ 9/11 Commission Campaign in 2010.

RSVP for Mike Gravel and Citizens 9-11 Initiative to add comments!