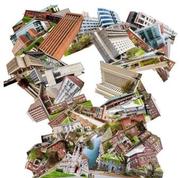 Nationally known artist Jennifer Williams was chosen to create artworks on two large scale banners for the prominent South facade of the Fine Arts Center at UMass Amherst. The University Museum of Contemporary Art convened a committee of students, staff, and faculty who selected Jennifer Williams of Brooklyn, NY, to create the 12-foot by 24-foot works. The site specific project consists of a two-part photographic collage of the UMass Amherst campus. The fragmented images span a century of the campus’ architectural expressions, referencing UMass history from agricultural college to research university.

Williams, whose work was most recently on view at the celebrated Highline Park in New York, describes her approach to using photography:

…not as a tool to stop time, but to control time passing. My work engages traditional photographic languages while simultaneously questioning its "truth dimension," exploiting photography’s ability to represent what is both true and what is false simultaneously. Modern printing technologies and graphic arts materials allow me to push the imagery’s object quality into a painterly realm, while the work’s interaction with space describes a scale and syntax belonging to the twentieth century sculptural tradition.

The Summer Art Project, in collaboration with the UMass Summer Program, celebrates the academic activities on campus ─ from language courses for international students to the New England Regional Soil Science Certificate Program.