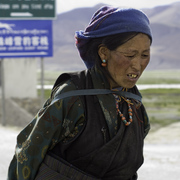 In 1959, the Tibetan uprising against the Chinese government resulted in the exile of The Dalai Lama and thousands of Tibetans who sought refuge in India. The Indian government generously supported the Tibetan people in maintaining their rich cultural and intellectual heritage through the establishment of a government in exile and the creation of Tibetan universities in India. These images attempt to display the success and pride of Tibetans in preserving their culture at the Tibetan university at Sarnath, where Buddha gave his first public teachings. Yet, it cannot be forgotten that they are visitors in another country, another culture; the images capture that beyond the walls of the tranquil Tibetan university is the old, rural, traditional India with the city of Varanasi but a few miles distant.

Tibetans are a people in transition between their old ways and the new. Tibetans who live in large cities like Lhasa, have access to movie theaters, TV at home and taxis. Those who live in the country make their own butter from yak fat and live a nomadic life. Since Tibet became part of China, Tibetans have struggled to keep their culture and ways of life. They do so in secrecy, with dignity, generosity and humor. They are a wonderful and friendly people who openly allowed Leslie and Liliana to photograph them and their children. Tibetans in Tibet is about who the people are, where they live and what they look like. It is a celebration of the people and their heritage.

Leslie R. Jaffe is college physician and director of Health Services at Smith College. In January of 2008 and 2009, he was privileged to participate in the Five College Tibetan Studies program at the Central University for Tibetan Studies, in Sarnath, India.

Liliana Klass is a teacher at Fort River School in Amherst, MA. Born in Argentina, she has lived in this country for many years. She loves to take photographs of people doing their daily routine, noticing the common and the uncommon among us. Leslie and Liliana are married and are the parents of two sons.