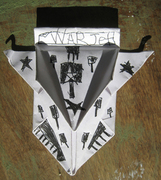 Welcome to the first American activity of the acclaimed international artist, WAR Jet. WAR Jet is a mysterious omnipresent phenom, unknown in personages, renowned in anonymity.

From Monday, August 23, to Monday, August 30, 2010, the masked artist will be working in residence at the A.P.E. at Window Gallery every day from open until close, and beyond.

WAR Jet came into existence following the discovery of a small paper airplane with the words “WAR Jet” written on it. Like an anonymous genie from a secret bottle, WAR Jet the artist sprung from the mysterious WAR Jet the paper plane, sworn to strict anonymity in much the same way that the WAR Jet object’s maker will forever be unknown and unidentified. The nature of the WAR Jet paper plane’s intrigue stems from several revelations: it looks like a child probably made it; it functions as a symbol of the incongruous obsession children have with powerful yet violent machines; it is a mirror that reflects frightening aspects of society that adults take for granted. WAR Jet begins with–but is not bound to–these themes.

On view at the A.P.E. this August will be the original “WAR Jet” paper airplane, as well as WAR Jet’s personal wardrobe of myriad disguises, including masks and varying behavior patterns. As resident artist, WAR Jet will be creating, assembling, and installing various other works that will introduce Northampton to WAR Jet’s abounding oeuvre of visual and ephemeral art.

In order to share the experience of international anonymity, WAR Jet will host a family-friendly mask-making workshop in the A.P.E. at Window Gallery on Saturday, August 28, inviting the public into the space to embellish pre-made, “blank” paper masks with markers, glitter, Styrofoam, cotton, found objects, etc. In addition, WAR Jet will be performing a series of concerts and other activities to expound upon the sheer truth of WAR Jet’s multidimensional omnipresence. Thusly, “WAR Jet” aims to create a new kind of collaboration, where anonymity constructs the individual and fuses the group. We’am WAR Jet! You can be too!

This project is supported by a grant from the Northampton Arts Council.