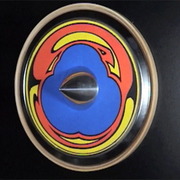 ANAMORPHISM by definition is a distorted projection or perspective; especially an image distorted in such a way that it becomes visible only when viewed in a special manner. In my recent body of work, I chose to revive conic anamorphism, a form dormant for centuries, as a contrast to the jabbering cacaphony which surrounds and saturates us. Reflective cones (designed and manufactured in billet aluminum) offer a Rosetta stone coherence to the paroxysmal attacks of smiles, skulls and subliminal marks that exist in their orbit. The reflective cone (a legendary shiny object) seduces the viewer with near infomercial braggadocio. The viewer’s response is either to glance at or to gaze upon it. My paintings swim through personal and mass-media images and elegantly fold, spindle and mutilate them into objects of desire. -- FLETCHER SMITH

Anamorphic art was a popular form of both serious art and visual entertainment beginning in the sixteenth century. While its methods and geometrical elucidation belong to the seventeenth century, it was most practiced as a serious art form in the eighteenth century, one that often used anamorphism to manipulate an image so that the true message, often political in nature, was readable only by the initiated. By the nineteenth century, it was almost completely relegated to the nursery as an amusement for children. Nevertheless, it retains some popularity today, and a small coterie of artists still practice it.

The earliest known anamorphoses were those of da Vinci and took the form of a laterally stretched child’s face and a sketch of an eye. Today anamorphoses are actually commonplace in busy cities. The traffic directions and symbols that are painted on roadways are distorted anamorphically. The typical form of anamorphic display seen today requires reflection in a mirror for reconstruction of the image. Of the possible types of display, the cylindrical mirror is the most common. -- Jim Hunt, "Anamorphic Art in the Time of Shakespeare"