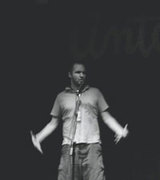 
1. Melissa Newman-Evans is a recent Emerson College gradaute who has been attending the Cantab off and on for 4 years now. She currently both writes nerdy poetry for and waits tables at the Cantab, and goes in
disguise by day as mild-mannered QA Tech and problem-solver for Pearson Custom Publishing. She likes robots, cats, and long walks into the future.

Stone has toured the country as part of Grand Marnier's SlamAmerica bus, and the 2003 Poetry Is Gay Tour with Morris Stegosaurus. He is currently a part of the 365.365, a collaboration of writers writing a poem a day for the calendar year 2009. While he is woefully behind, he has put together enough material for two new chapbooks "RIbcage Is The New Soul" and "All Of The Sheep Are Counting On You".

His work runs the gambit from politics to persona work to love poetry (he falls in love a lot), and even the occasional slam inspired battle rhyme. His work has appeared in several print an electronic anthologies, as well as spoken word CD compilations. He's also the bartender at The Lizard Lounge's sister slam, The Cantab, where he has been a member of four nationally competing slam teams and has served as their Champion of Champions more times than any other poet. Come see him on a Wednesday night, he mixes a mean drink AND a mean metaphor.
______________________________

The spoken word revolution has received both acclaim and disdain from the torn literary world. Now, the revolution is coming to Northampton and you can judge for yourself. The poetry slam was invented in 1986 by Chicago construction worker Marc Smith. After migrating to New York City in 1991, it caught the attention of the mainstream media when Russell Simmons’ Def Poetry Jam aired on HBO in 2002. Since then every major city in America began sprouting slam teams and spoken word venues. This proliferation of poetic venues has given rise to what some are calling the “third wave” of the spoken word movement.

Portal Arts Group is an unincorporated organizational arts team centered around bringing the best of emerging visual and performance-based arts into an engaging personal setting and social atmosphere.

Space for this event is provided by Thornes Marketplace & storefront ART, the artist residency and exhibition program of Commonwealth Center for Change made possible with support from Art Angels and The Northampton Arts Council.

Commonwealth Center for Change is a 501(c)3 nonprofit organization that is facilitating a network of mutual support and collaboration that sustains and strengthen a dynamic creative community by offering affordable space and resources to local social mission organizations and artists. www.commonwealthcenter.org

Comment by Dana Wilde on September 14, 2009 at 10:59am
I am part of Portal Arts Group now - helping host and organize this event. I'm really hoping to cultivate the Open Mic environment, and bring some variety to the features. The open mic is a friendly, non-competitive vibe -- a wonderful place to practice your craft, whether you're a first-timer, beginner, or seasoned slam champion. This is a wonderful way to gain some experience, and to connect with your creative community. I'll also be promoting local classes and workshops designed to assist people in recovering/discovering and applying their creative voice and authentic self to performance art, writing, movement, visual arts, and personal growth...