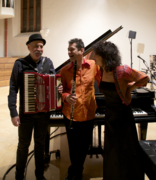 Sklamberg & the Shepherds brings together three of the world's leading performers of traditional Eastern European Jewish music: Merlin Shepherd, whose great-grandparents emigrated from Ukraine and Romania to escape pogroms and seek a better world in Europe (Merlin grew up in Wales); Lorin Sklamberg, whose ancestors emigrated from a small town in Ukraine to the United States; and Polina Shepherd, whose grandparents escaped the Holocaust by fleeing from Kiev and Odessa to Siberia, where she grew up in Tatarstan.

RSVP for Concert: Sklamberg & The Shepherds to add comments!