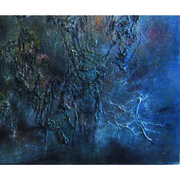 Artist’s Statement: My art has been inspired equally by the beauty of nature and the chaos created by cataclysmic events such as hurricanes, tornadoes and floods: major influences on my paintings in recent years, many of which have reeds or grasses embedded into the surface to increase the texture and ‘connect’ them with the earth.

I am also fascinated by the idea that we leave traces of our existence that are both material and ephemeral: layered surfaces of ancient walls holding indecipherable secrets. I have begun to include fragments of text in my work; hand-written with pen and ink, mostly obscured but allowing glimpses of words and phrases floating in or under the surface. These dislocated scraps of letters are suspended in enigmatic space, which could be water, air or distant land masses: these most recent works reflect a growing feeling of separation and isolation from the country of my birth and childhood.

I allow chance to take a hand in the creation of my work, feeling that it is necessary to keep challenging oneself as an artist in order to continue the creative process.

Originally from England, Cecilia Tusinski lives in Leyden, Mass with her husband Peter. She began painting in 2003, inspired by rapidly evolving world events, and memories of her mother painting portraits in oils many years ago. She has had several art shows in the area, including a summer-long exhibit at the Angel’s Rest Conference & Retreat Center in Leyden in 2007, two exhibits at Bart’s Café in Greenfield in 2008, Artspace members shows in 2008 and 2009 and a show at the Burnett Gallery, Amherst in June 2009. Some of her larger works may be seen hanging at the Bella Notte Restaurant in Bernardston. She maintains a studio in the tower of the old Webb building on Hope Street, Greenfield.