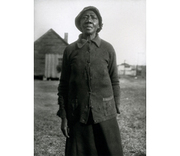 Eudora Welty: Photographs of the 1930s and 40s will be exhibited in the Grubbs Gallery in the Reed Campus Center at The Williston Northampton School from February 27 – April 9, 2011. A reception will be held on February 27 from 2:00 to 5:00 p.m.

During her spare time as a junior publicist for the WPA in the 1930s, Eudora Welty captured people and places in Mississippi with her camera. The Pulitzer Prize-winning author would later write in her memoir One Writer’s Beginning, “Photography taught me that to be able to capture transience, by being ready to click the shutter at the crucial moment, was the greatest need I had. Making pictures of people in all sorts of situations, I learned that every feeling waits upon its gesture; and I had to be prepared to recognize this moment when I saw it.” Eudora Welty was known for her writing, yet her photographic documentation of the Depression-era created a compelling record of the time and place that would greatly influence all of her creative works. Her photographs have been shown in the Smithsonian, the National Museum of Women in the Arts, and the Museum of the City of New York.

RSVP for Eudora Welty: Photographs of the 1930s and 40s to add comments!