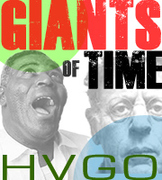 Tickets are $15 for adults, $12 for students and children. They are available in advance at www.hvgo.org. They can also be purchased at the Center for the Arts office, 11am-4pm, Tuesday-Friday and at the door beginning at 6 pm on the night of each performance.

GIANTS OF TIME explores the concept of musical time through newer Classical and older Popular music. Blanchette explains, “All Blues music is about time, the repetition of words, riffs, and rhythms that creates an infinite form for emotional expression. Philip Glass similarly uses repetition, but employs classically-derived arpeggios, counterpoint and texts to win the listener’s ear and heart.”

HVGO is an avant-garde music ensemble, founded by Peter Blanchette in 2009, comprised of more than 20 talented acoustic and electric guitarists from widely varied traditions. The orchestra is a resident company at the Northampton Center for the Arts. Though known as a Bach specialist, Blanchette has a repertoire of unusual and celebrated musical arrangements that run from medieval to contemporary to ethnic styles. He is the recipient of WFCR Foundation’s 2011 Arts & Humanities Award for Outstanding Individual, and is a veteran performer of such venues as NPR’s “A Prairie Home Companion” and The Kennedy Center for the Performing Arts.