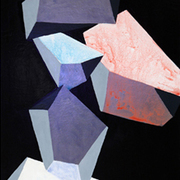 Brian Shafford has always been drawn to pristine, open spaces. Born in Oregon, he attended the University of Alaska and trained in wildlife and fisheries biology. It was here in the back woods, camping by the rivers, lakes and oceans, that an abiding interest in nature evolved and how all life forms a whole, from the microscopic to the universal.

In 1989 Shafford hiked the entire distance of the Appalachian Trail, from Georgia to Maine. It was an image encountered during this hike from a mountaintop in Virginia of undulating mountains in infinite shades and tones of blues that heralded the beginning of his life as a painter.

Shafford began painting in 1993 when he was 47 years old. Other than two watercolor lessons with a Benedictine nun he is essentially self-taught. His life as an artist is analogous to that of an explorer: seeking new territory, pushing boundaries, taking risks and meeting new challenges with a willingness to be continually surprised. Working exclusively with ground pigments he creates his own paints: casein, watercolors, and acrylics. The genesis for his paintings spring from sources as diverse as his daughter’s journey to the bottom of the Grand Canyon, theoretical physics, mythology, the ascent of an elevator, or an erupting volcano.