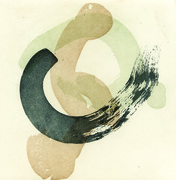 Residing as she does in Berkshire County, MA, on a former farm property, Joan Dix Blair is an observer of nature — her observations are the springboard for her art work. From animal to pond to rock, she draws her abstractions based on the thing at hand. On view are recent prints from three separate series titled “Shale,” “Surfaces,” and “Reptiles.” Though the drawn abstractions may seem remote from the real noticed thing, the drawings are connected in her imagination to the initial impulse to record something from the real world.

Northampton artist Annie Bissett has been making woodblock prints using the traditional Japanese method since 2005, following a nearly 20-year career as a commercial digital illustrator. Annie’s prints explore a wide range of contemporary American socio-political issues and themes. This show at Hosmer Gallery is a sneak peek at the first two parts of a four-part series titled “God Is Our Witness,” which deals with some of the history of the gay liberation movement in the last half of the 20th century. Part 1, Titled “The Curse,” is a group of prints about exile and isolation. Part 2, “Counterspells,” is still in progress and is a celebration of some of the groups and organizations that helped move LGBTQ rights forward in the U.S. from the middle of the 20th century to the present day.

RSVP for Prints by Joan Dix Blair and Annie Bissett to add comments!