The Easthampton Alphabet by Burns Maxey 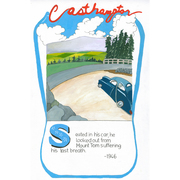 Burns Maxey is an intermedia artist whose work combines new and old technologies and media specializing in the study of place and narrative. Her work often includes video, performance, sound, sculpture, photography, and painting, forgoing the notion of stylistic uniformity in the interest of the experience.

Burns earned her BFA from the Rhode Island School of Design. She has exhibited in Boston, San Francisco, New York, and throughout the New England area. She is currently working on her third installment of a four-part multimedia project called Project Elements Easthampton: a study of the four elements and how they relate to the city of Easthampton, MA. Burns is an artist member of Mobius, an artist-run organization based in Boston, whose mission is to generate, shape, and test experimental art, established in 1977.

Find out more at www.projectelementseasthampton.com.

Comment by Jennifer Knight on May 13, 2011 at 5:36pm
At this point will not be attending, thanks for the invite