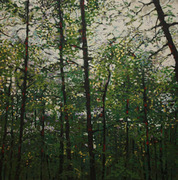 Susan Paju lives in Athol, Massachusetts and takes the natural beauty of the North Quabbin region as the subject of her paintings. She holds a BFA in painting from the State University of New York at New Paltz and a Masters in Library Science. For years, she put art-making largely aside as she pursued a career in public libraries. In the last several years she began to paint again in earnest. She has had several works included in recent regional juried exhibits and was awarded the Saara Parker Painting Prize at the Fitchburg Art Museum's 2012 regional exhibition.

Artist's statement:
For these paintings I've chosen subjects from the natural world that are inherently abstract: cloudy skies, the surface of water, the tangled interior of woods. The natural abstraction of these subjects allows for a freedom in both the depiction of the subject and the handling of the paint. Although the particularities of a place are not important to me, the spirit of the place is. It is what gives these paintings whatever meaning and emotional resonance they may have. I think emotion is key to the human-nature relationship, and is an important component of both making and viewing art.

Debra Dunphy is an accomplished artist and art instructor who works in many styles and media including oils, colored pencil and pastels. She is particularly known for her work as a portrait artist who strives to capture the essence and likeness of the subject. Dunphy is self-taught and has exhibited her paintings in museums and galleries including several invitational shows, where she has been awarded a number of blue ribbons.

Dunphy took part in the restoration project for the Holyoke Merry-Go-Round as the commissioned muralist, painting several panels depicting Holyoke's historical landmarks. She is involved in many groups and organizations, including the Holyoke Cultural Council and Holyoke League of Arts and Crafts, where she has served as President.

Dunphy has taught at the Holyoke Creative Art Center (HCAC) since 1997, and teaches adults and children in her own studio at the Canal Gallery in Holyoke and other locations. While portrait painting is her greatest passion, she finds sharing with others the joy and satisfaction of creating their own art equally rewarding.

Brigita Fuhrmann began her artistic career in her native Czech Republic. She came to the USA on a scholarship to study at the Cranbrook Academy of Art in Michigan where she earned her BFA, and later at the Rhode Island School of Design where she earned her MAE. In 1992 she received an MFA in painting from the University of Massachusetts at Dartmouth. She has exhibited widely in the United States, Europe, and Canada, winning several significant awards for her work.

The recent resurgence of interest in the national heritage and in the search for family ancestors inspired Brigita to paint a series of portraits in the style of early American itinerant painters. The oil paintings in this exhibition bring to existence people, mainly children, who may have lived more than one hundred years ago in the houses that are still part of our New England towns, and in which many of us still live.