The Last High Queen of Ireland 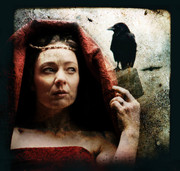 Starring Stephanie Carlson as Gormlaith, Thom Griffin as Brian Boru and Maureen McElligott as the Sorceress, Aval, The Last High Queen of Ireland transports you to the land of 11th century Ireland where enchantment and mystery fill the air. Filled with passion, magic and power, The Last High Queen of Ireland shows what happens when vaulting ambition o’erleaps itself through the lyricism of modern Irish music and the mystical qualities of shape-shifting theater. It follows the journey of Gormlaith, considered the most beautiful woman of her time, who was the third wife of Brian Boru. Brian Boru, the High King of Ireland who attempted to unify Ireland and forge a common Irish identity, is celebrated in Irish history. Gormlaith, an equally intriguing and powerful figure, has disappeared from historical narrative altogether. Hers is a fierce and dark tale in which issues of gender, power, political transformation, and memory merge.
olddeerfieldproductions.org

RSVP for The Last High Queen of Ireland to add comments!